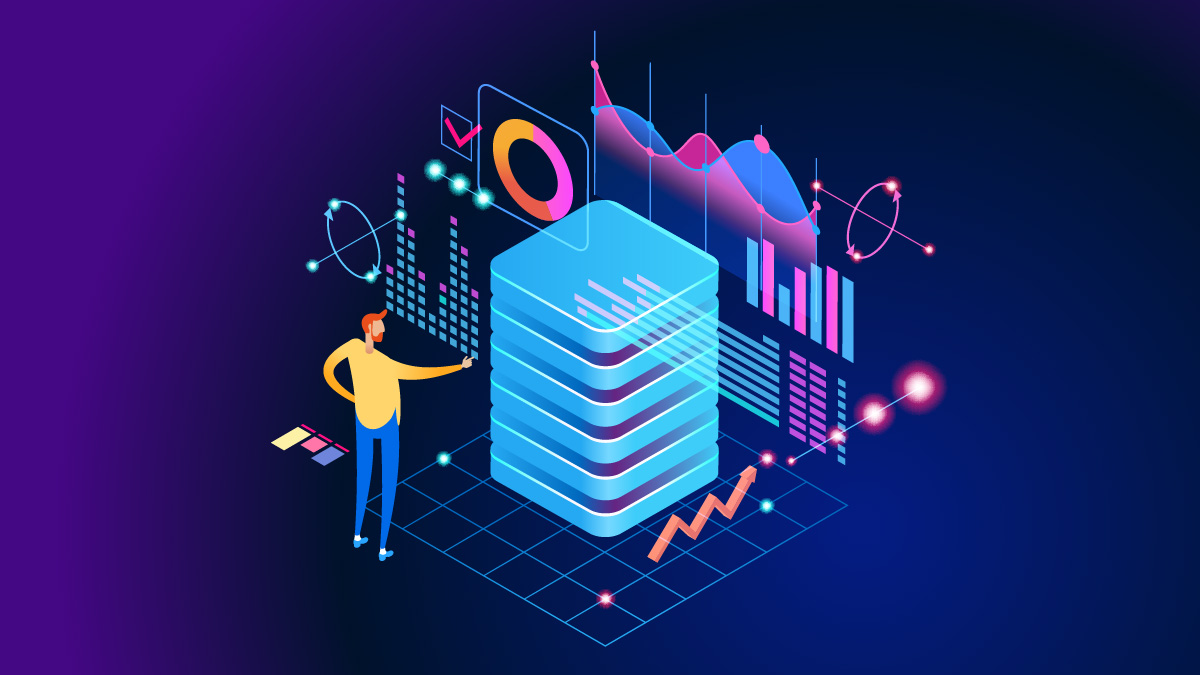 Machine learning has now entered its business heyday. Almost half of CIOs were predicted to have implemented AI by 2020, a number that is expected to grow significantly in the next five years. Despite this, seven out of ten executives whose companies had made investments in artificial intelligence reported minimal or no impact from them, according to a 2019 research report from MIT.

Why? Because creating a machine learning model and putting it into operation in an enterprise environment are two very different things. The biggest challenge for companies looking to use AI is operationalizing machine learning, the same way DevOps operationalized software development in the 2000’s. Simplifying the data science workflow by providing necessary architecture and automating feature serving with feature stores are two of the most important ways to make machine learning easy, accurate, and fast at scale.

In a typical data science silo, a new project follows a pipeline:

Considering how rare and expensive data scientists are to employ, this inefficiency is far from ideal. The good news is that there are many approaches to MLOps that streamline the ML architecture and data to feature process.

The days of simple models whose training data can fit on a laptop spreadsheet are over. Now, data is minimally tens of terabytes large, and often at the scale of petabytes. Building the distributed computing infrastructure that you need to execute feature pipelines and model training at this scale is a major headache for data scientists.

Containers have become necessary for these large-scale deployments of machine learning. However, in order to deploy a model, a data scientist has to work with machine learning engineers to build each container and manually wrap it in a RESTful API so the model can be called from applications. This is unnecessary coding, and frustratingly requires the creation of new containers in order to scale a model. The integration of Kubernetes architecture automates container orchestration so that data scientists can automatically scale their models, and has become an industry standard. But executing a Kubernetes integration requires data scientists to become Kubernetes experts, or collaborate with a machine learning engineer to do it for them.

New database deployment makes it as easy as possible to deploy a model. Traditionally, container-based endpoint models as discussed above require excessive software engineering. With database-deployment, it only takes one line of code to deploy a model. The database-deployment system automatically generates a table and trigger that embody the model execution environment. No more messing with containers.

All a data scientist has to do is enter records of features into the system-generated predictions database table to do inference on these features. The system will automatically execute a trigger that runs the model on the new records. This saves time for future retraining too, since the prediction table holds all the new examples to add to the training set. This enables predictions to stay continuously up-to-date, easily–with little to no manual code.

The other major bottleneck in the ML pipeline happens during the data transformation process: manually transforming data into features and serving those features to the ML model is time-intensive and monotonous work.

A Feature Store is a shareable repository of features made to automate the input, tracking, and governance of data into machine learning models. Feature stores compute and store features, enabling them to be registered, discovered, used, and shared across a company. A feature store makes sure features are always up to date for predictions and maintains the history of each feature’s values in a consistent manner, so that models can be trained and re-trained. 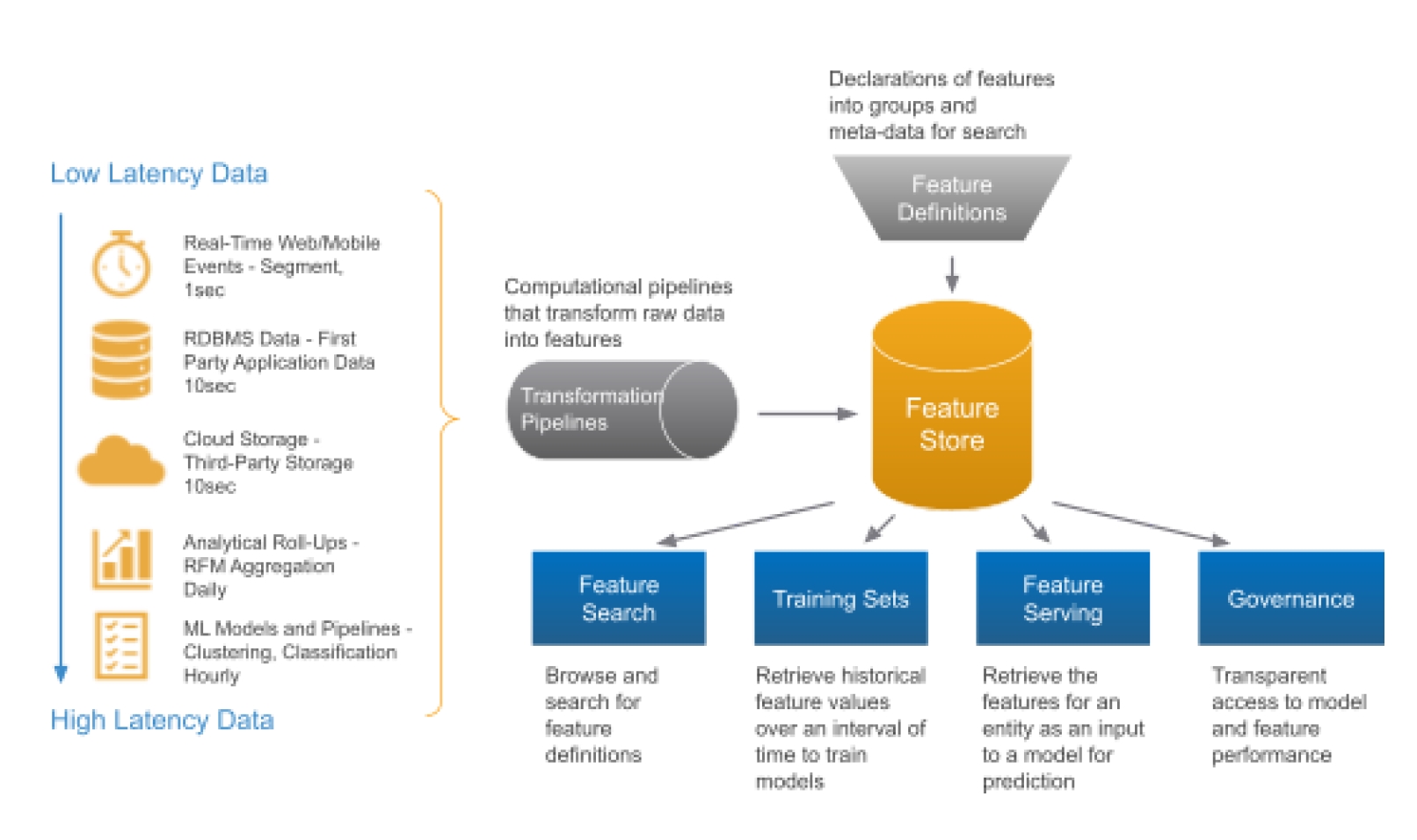 Feature stores are fed by pipelines that transform raw data into features. These features can then be defined, declared into groups, and assigned meta-data that makes them easier to search for. Once the features are in the store, they are used to create:

1. Training Views. These are arbitrary SQL statements that join labels with feature sets, allowing data scientists to ensure that features and labels are point-in-time consistent. Training Views can be used to create many different training sets, that can vary in time and in what subset of features are included.

Creating a training view is:

2. Training Sets. These are a collection of designated features over a specific time window, sometimes combined with labels (in supervised learning) used to train models. It’s a simple call to retrieve a training set with pre-decided historical feature values from the feature store. 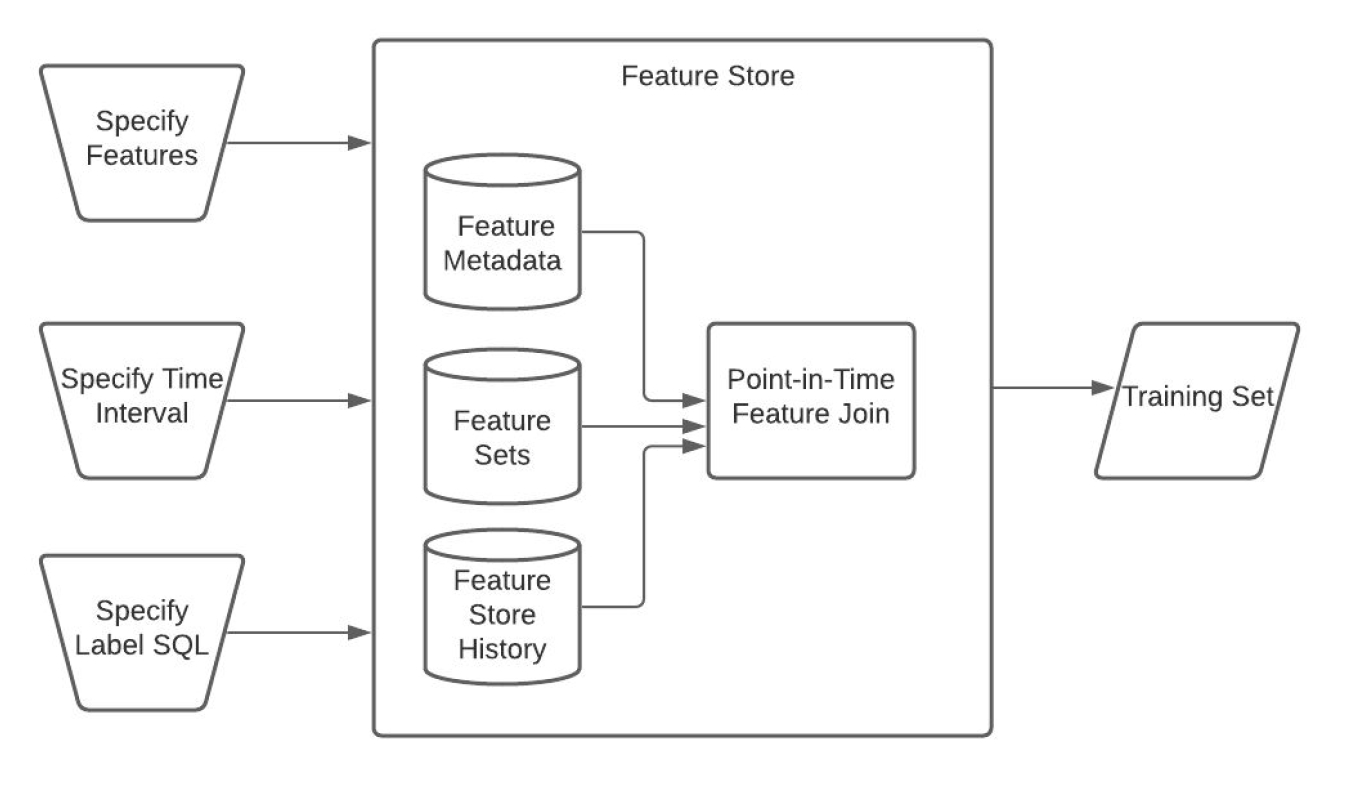 Creating a Spark dataframe from a training set looks like:

3. Feature Serving. Features are served to models directly from the feature store. It’s a straightforward call to retrieve the feature vector for an entity as an input to a model for predictions. 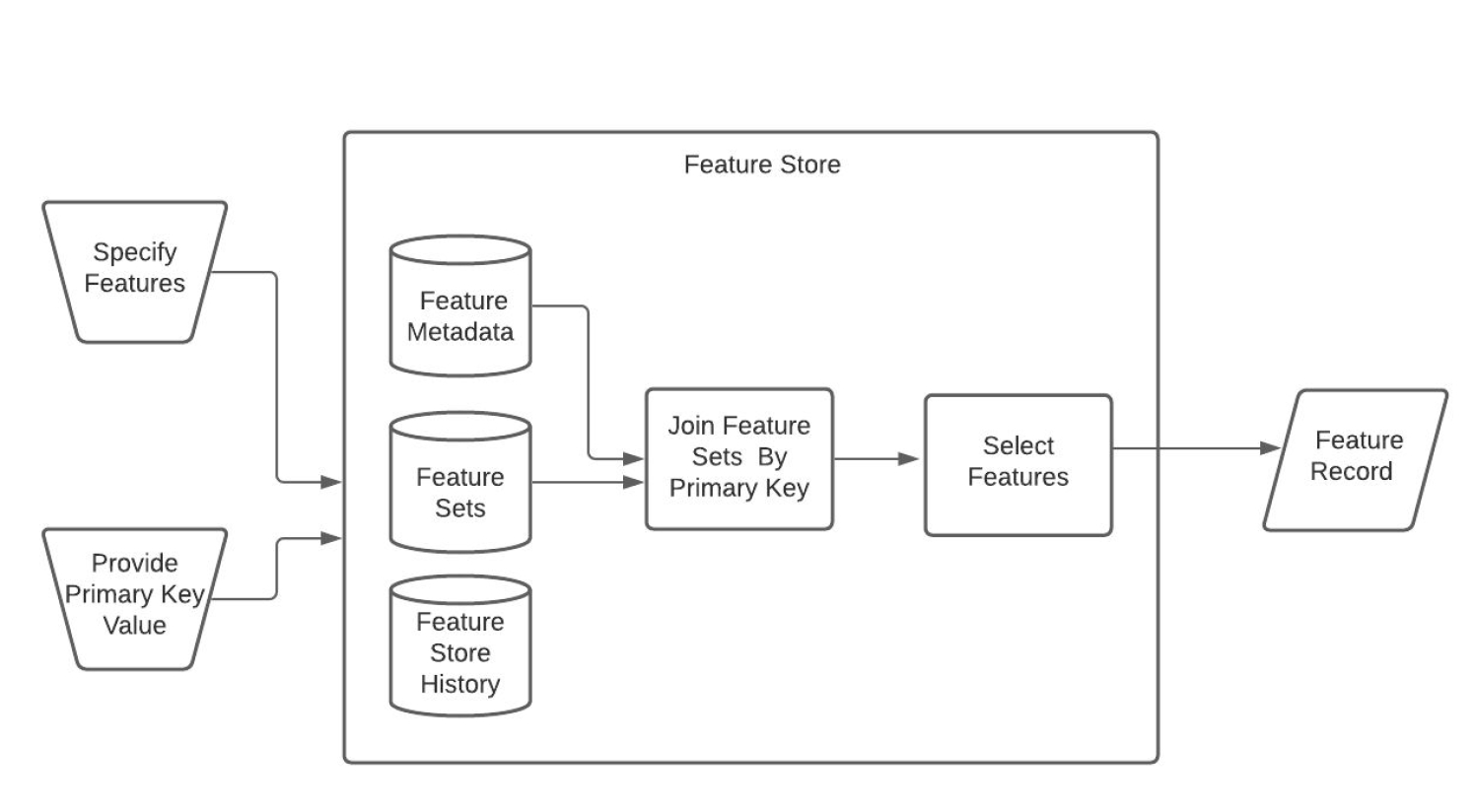 Benefits of a Feature Store 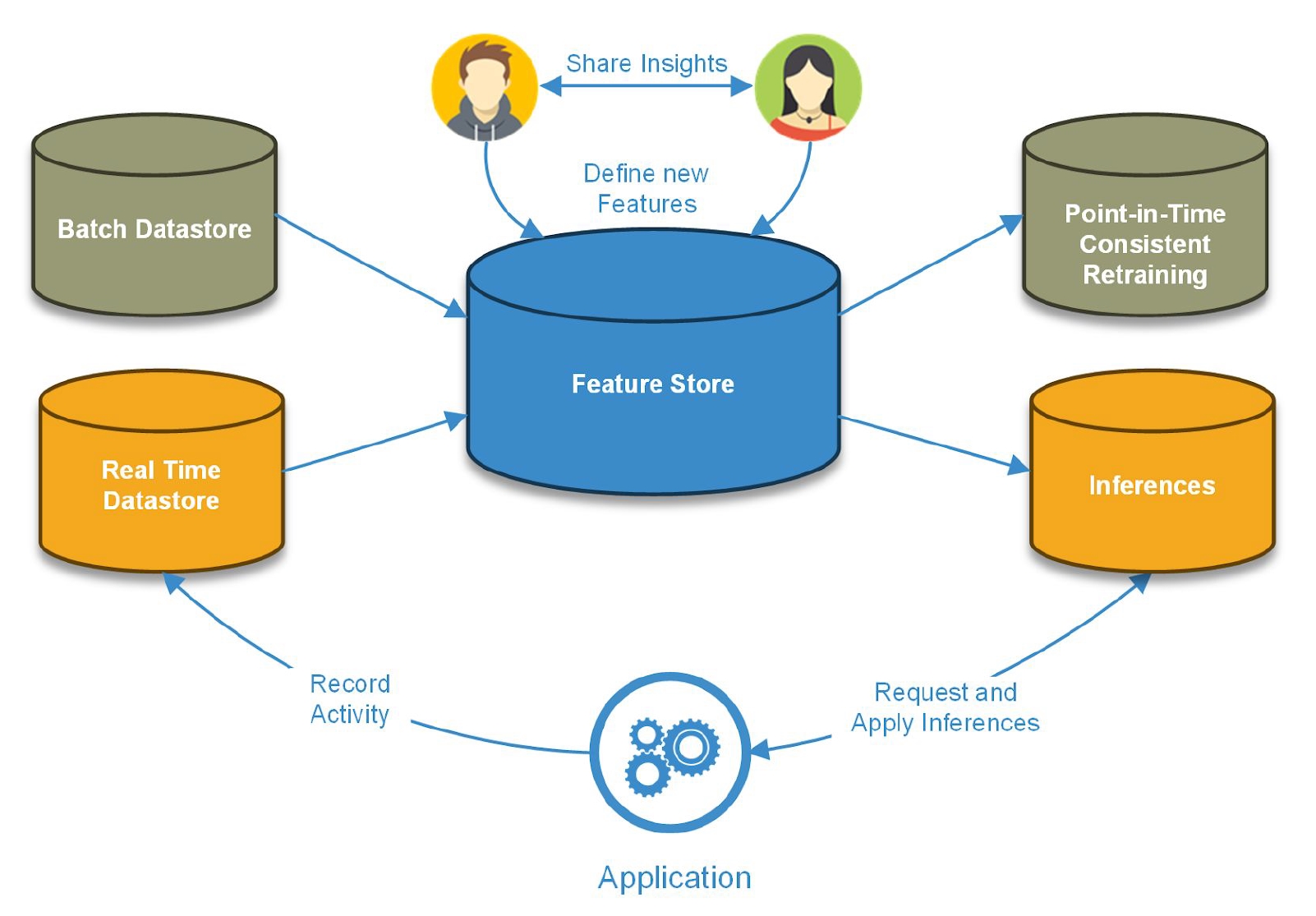 Figure 5: Data flow in a Feature Store based solution

There is another way. Using an OLTP/OLAP combined database allows you to store both types of data in the same platform, which will:

Few databases support both kinds of workloads and also provide horizontal scalability, yet an ACID-compliant OLTP and OLAP engine that can scale independently would seamlessly deliver both real-time and batch inference directly onto the Feature Store.

To help conceptualize how a feature store can really revolutionize the data science workflow, let’s take the example of an e-commerce business. This business wants to build an ML model that will provide customers with personalized item recommendations.

In order to suggest what product a customer should look at next, the model has to be fed data that can help it predict a customer’s buying behavior. This could include the last item the customer looked at on the site, an online feature, which would come from an operational or transactional database like MongoDB, DB2, or Oracle. Another input for the model could be a customer’s average monthly spending, a pre-calculated offline or batch feature, which would come from a data warehouse like Redshift or Snowflake. 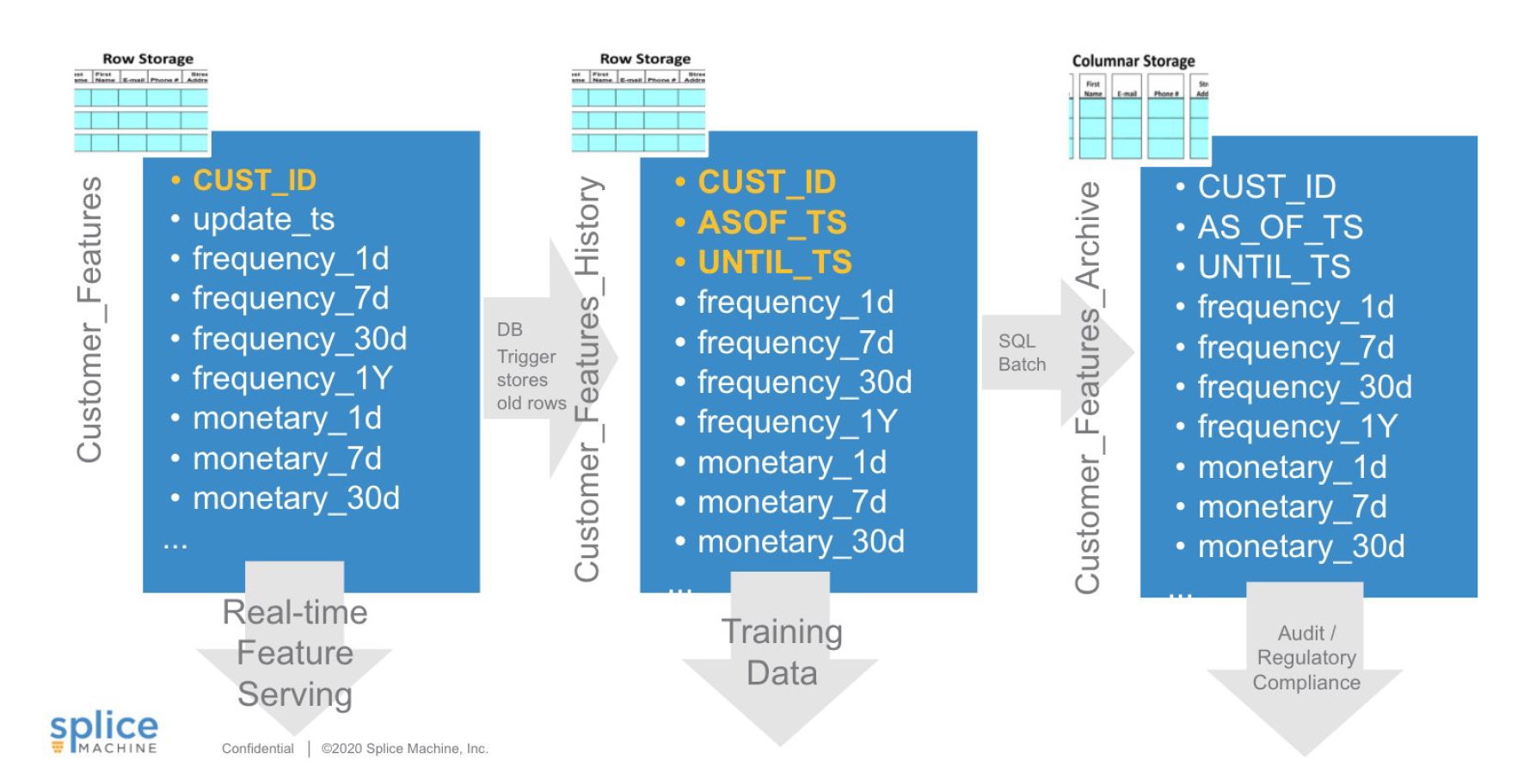 Without a feature store, a data engineer has to manually create bespoke ETL pipelines to feed data to the ML model. They have to write the code that moves data from the warehouse to the training sets, from the database to Jupyter notebooks model deployment, and manually engineer the data into usable features.

This is not easy to scale, as a new ETL pipeline has to be created for each data source for each different model. Though this works, pipelines are not always used consistently, and scaling an ML operation this way is incredibly time-intensive.

With a feature store, the data engineers only have to build one data pipeline from each data source to the feature store, and as many machine learning models as are necessary can pull their features from a central place. This means it will be the same amount of work architecture-wise to build two machine learning models as twenty, which makes the model pipeline incredibly scalable.

For this company, building a feature store is as simple as:

As explained above, most feature stores have two separate databases for online and offline features. In this case, the user has to manually manage these two kinds of features, which can become inconsistent. There is a ton of time and energy dedicated to keeping two different databases in sync, which can be undone as soon as one goes under for some reason or another.

Data parity is much easier to achieve when both online and offline features are stored in a single system. Linking the feature store to an ACID-compliant hybrid database makes it impossible to have a discrepancy between the two stores; if something new is introduced, the database triggers ensure the consistency of the online live feature values and the offline feature histories. This is more efficient, requires less code, and is less prone to consistency problems.

Feature Stores on the Market

While there are a number of technology companies who have built their own feature stores for proprietary use (including Uber, Airbnb, and Netflix), there are also a few open-source options on the market for companies who want to use a feature store but don’t want to build it themselves. Feast, Splice Machine, and Hopsworks are the three leading open-source solutions.

Feast is an open-source feature store with a very active community. Feast has great documentation and offers good SDK support for Python, Command line, Go, Java and some others, and is currently adding integrations with Kubeflow. Feast recently added Spark and Kubernetes support for more scalable solutions. Currently, Feast’s only online store is Redis.

Feast’s major weakness is that it doesn’t offer an offline store, though they plan to soon. This means that it won’t automate the input of historical feature values, which is a huge part of what a feature store does. If you were to use Feast right now, you would need to provide the historical values of the features yourself, and it would be your responsibility to ensure full lineage of your data.

Hopsworks by Logical Clocks is another open-source option. Their feature store is a modular component of the Logical Clocks offering, so you aren’t forced to use the entire system. They also have a completely unified UI that covers end-to-end MLOps. The Feature Store UI is pretty sophisticated, allowing the user to search for features, feature groups, training sets, etc. You can link features and groups to the pipelines that created them, using Apache Airflow for pipeline integration. Security is also built into the system.

Hopsworks is working on creating unity in the entire pipeline. Currently, users need to write scripts outside of the working environment to deploy models and create pipelines. In addition, Hopsworks is dependent on external systems for their store, as their offline feature store needs Hive.

The Splice Machine Feature Store contains all the functionality of the other stores, with a key difference: its single-engine feature store online/offline data is in the same place, allowing it to be ACID-compliant and singularly consistent. Even after Feast adds an offline store, they cannot guarantee consistency between those two stores, because they are distinct engines. Splice Machine offers the only feature store that can 100% guarantee that your offline and online data will be consistent, because it’s the only one that holds all the data in the same store.

In the vast majority of data science silos, data scientists aren’t able to focus on what they do best. They spend most of their time and energy building ML architecture and preparing data for models. By providing the necessary architecture for easy model deployment and streamlining the feature process, building a feature store on top of a combined OLTP/OLAP combined database can increase data science productivity one hundred times over.